Crossing the Tennessee River with a 30-inch Waterline

Everyone knows the simplest way to get from Point A to Point B is a straight line. Engineers love straight lines. Except, when designing waterlines, it is rarely that simple. Especially when the straight line in question runs directly under a major navigational thoroughfare like the Tennessee River.

CTI recently completed a project for Tennessee American Water (TAW) providing design, permits, easements, and construction phase services for 1800 linear feet of 30-inch waterline to bring water from a connection at TAW’s Water Treatment Plant on the south side of the Tennessee River to a connection on the north side of the river inside a gated community.

This project uncovered just how many factors can complicate getting from Point A to Point B.

CTI and TAW had to consider the most cost effective way to cross 1 ,400 linear feet of the Tennessee River, what materials should be used to anchor the pipe in place with a fast moving current, as well as the optimal location for the new pipe without disturbing multiple existing sewer and water pipes, as well as major navigational traffic.

An alternative analysis determined that “open-cut” construction for the pipeline was the only feasible method due to the location of the connection point on the north side. In addition, CTI determined tunneling under the Riverwalk was the least costly construction method to make the south-side connection without disrupting service to the Tennessee Riverwalk, existing 60 and 54-inch sewer lines, or 30-inch water line running under the walkway.

After deciding the optimal pipeline location, CTI had to obtain permits from federal, state, and local government agencies including: US Army Corps of Engineers (USCOE), Tennessee Valley Authority (TVA), TN Department of Environment and Conservation (TDEC), the City of Chattanooga, and Hamilton County, in order to confirm the construction work would not affect habitats of endangered species in the river, disturb any historic archeological sites, and that the ground surface along the route would be returned to its original condition.

With permits in place, bidding, awarding, and construction could commence. Reynolds Construction entered the lowest bid at $3.27 million. 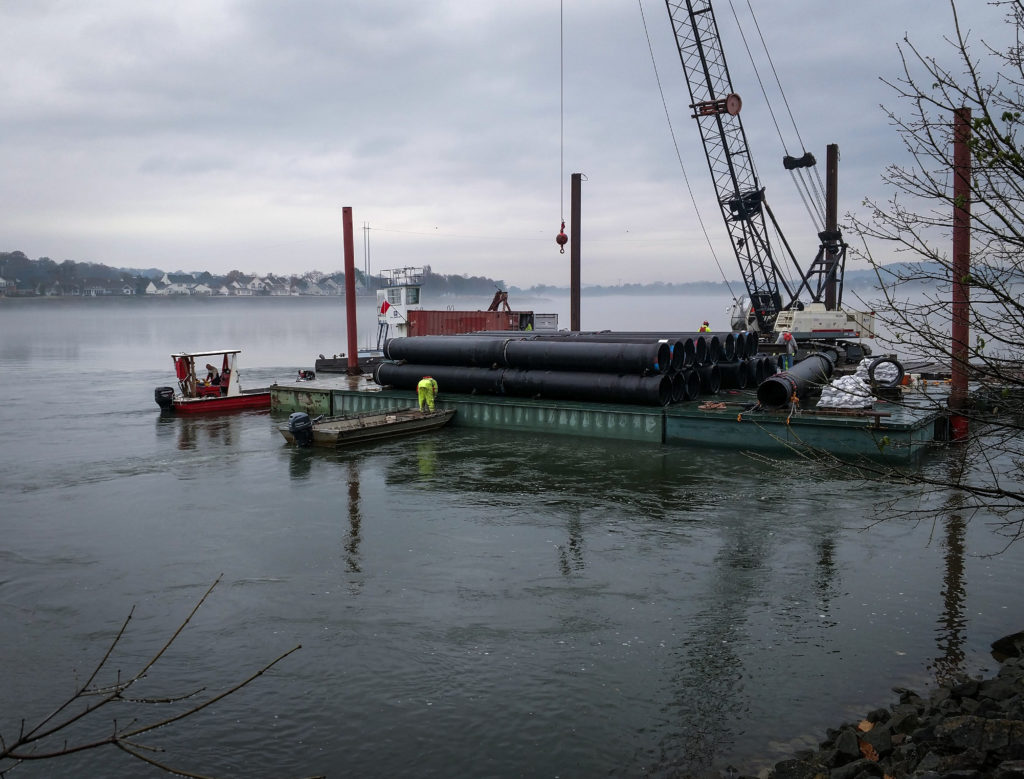 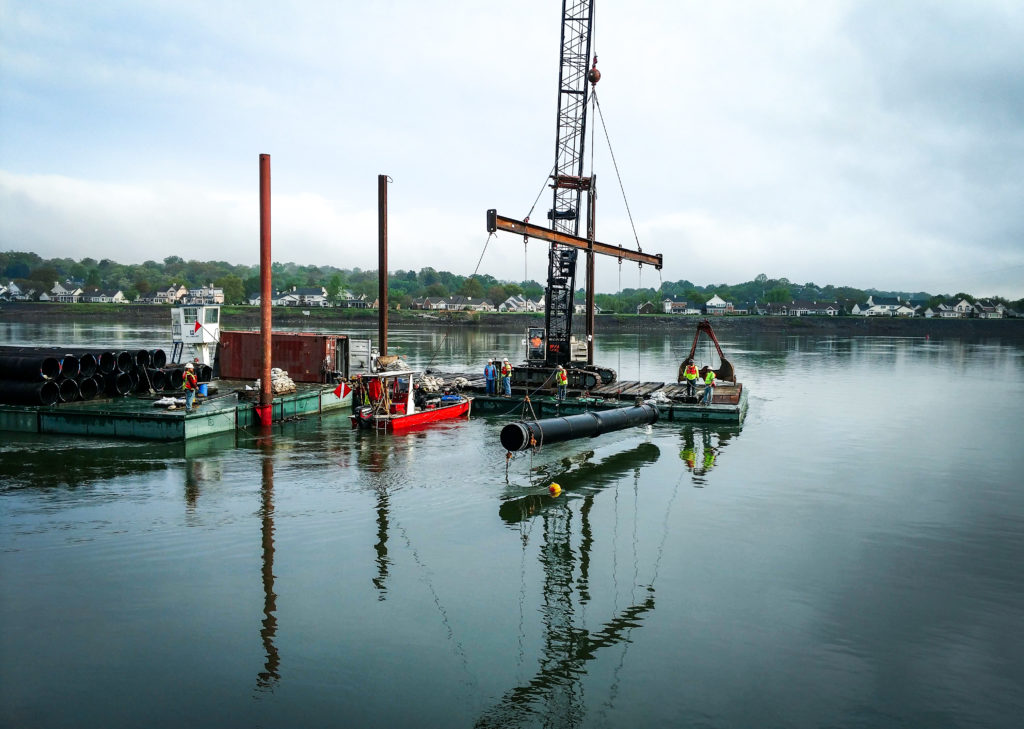 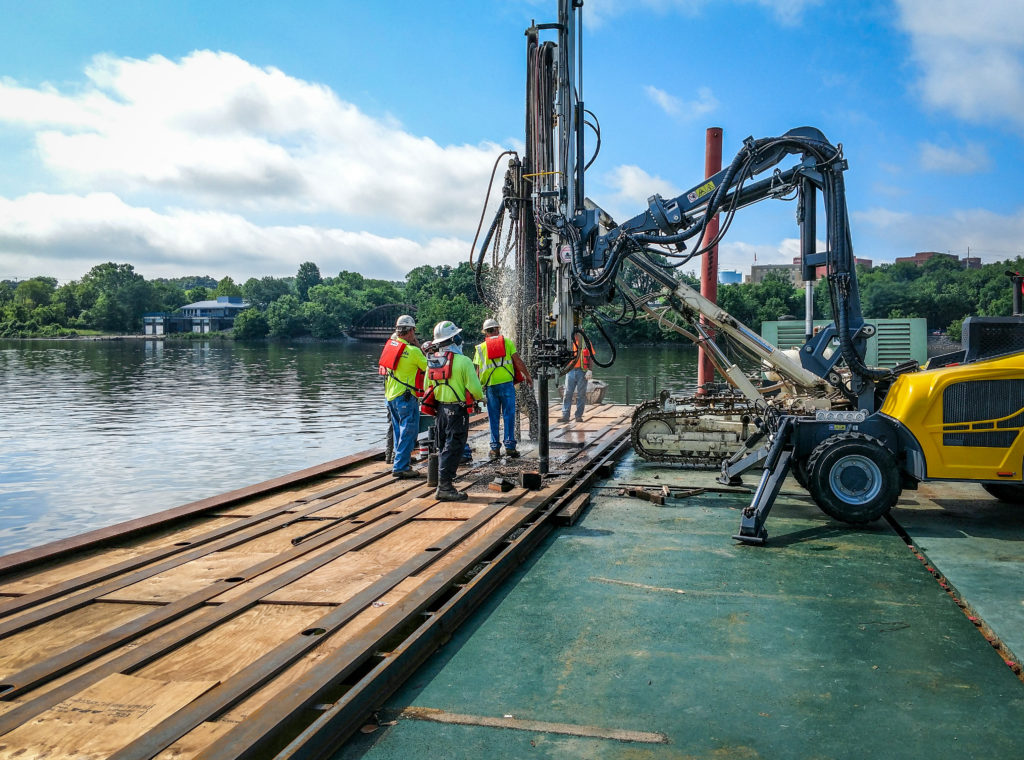 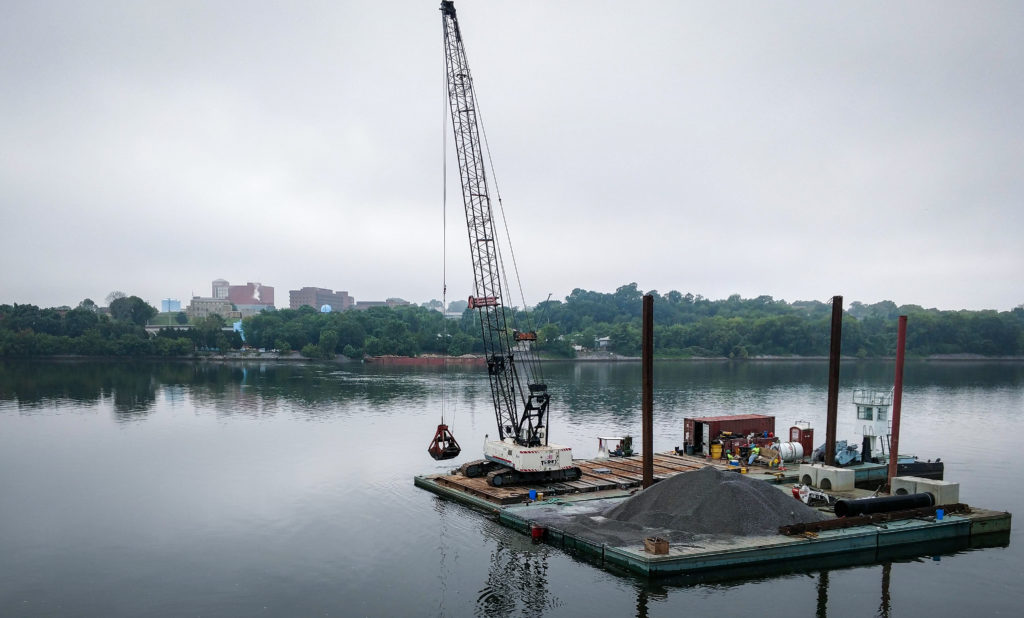 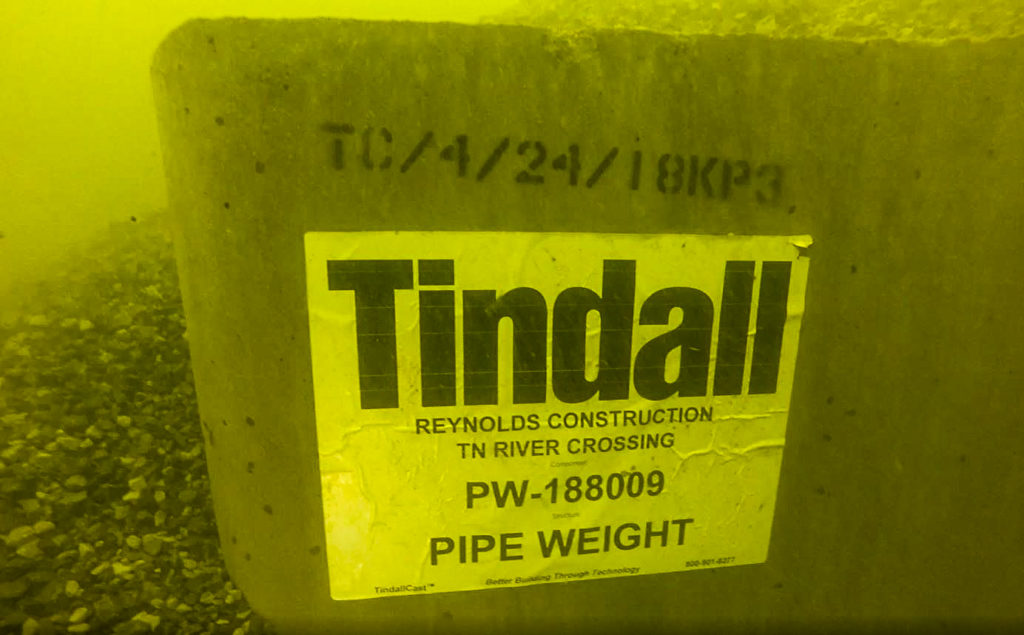 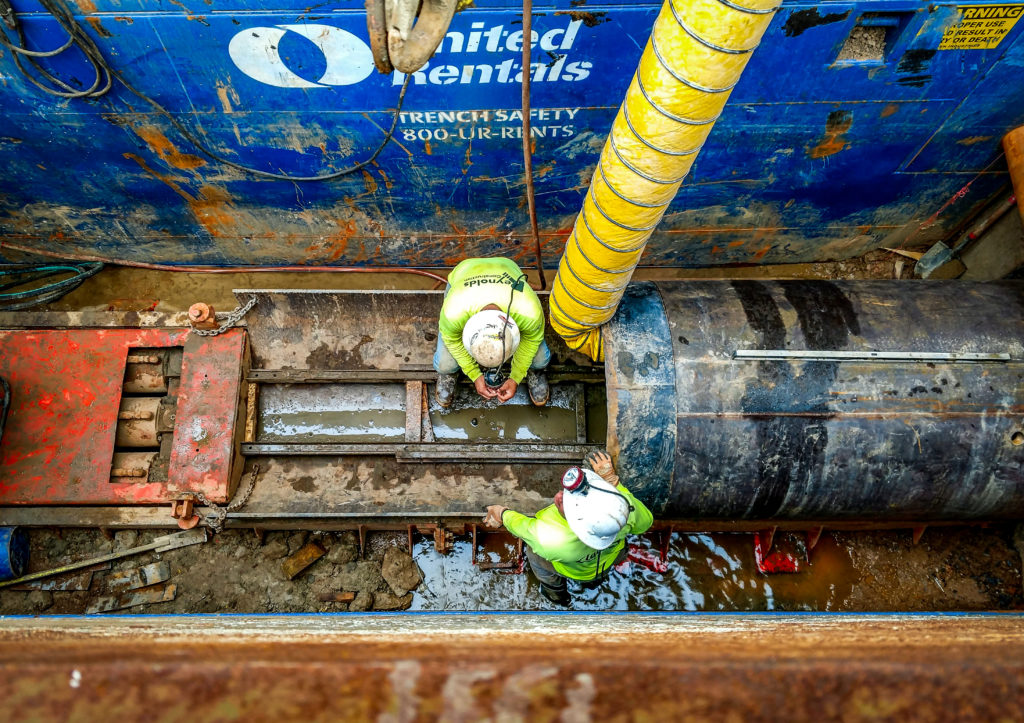 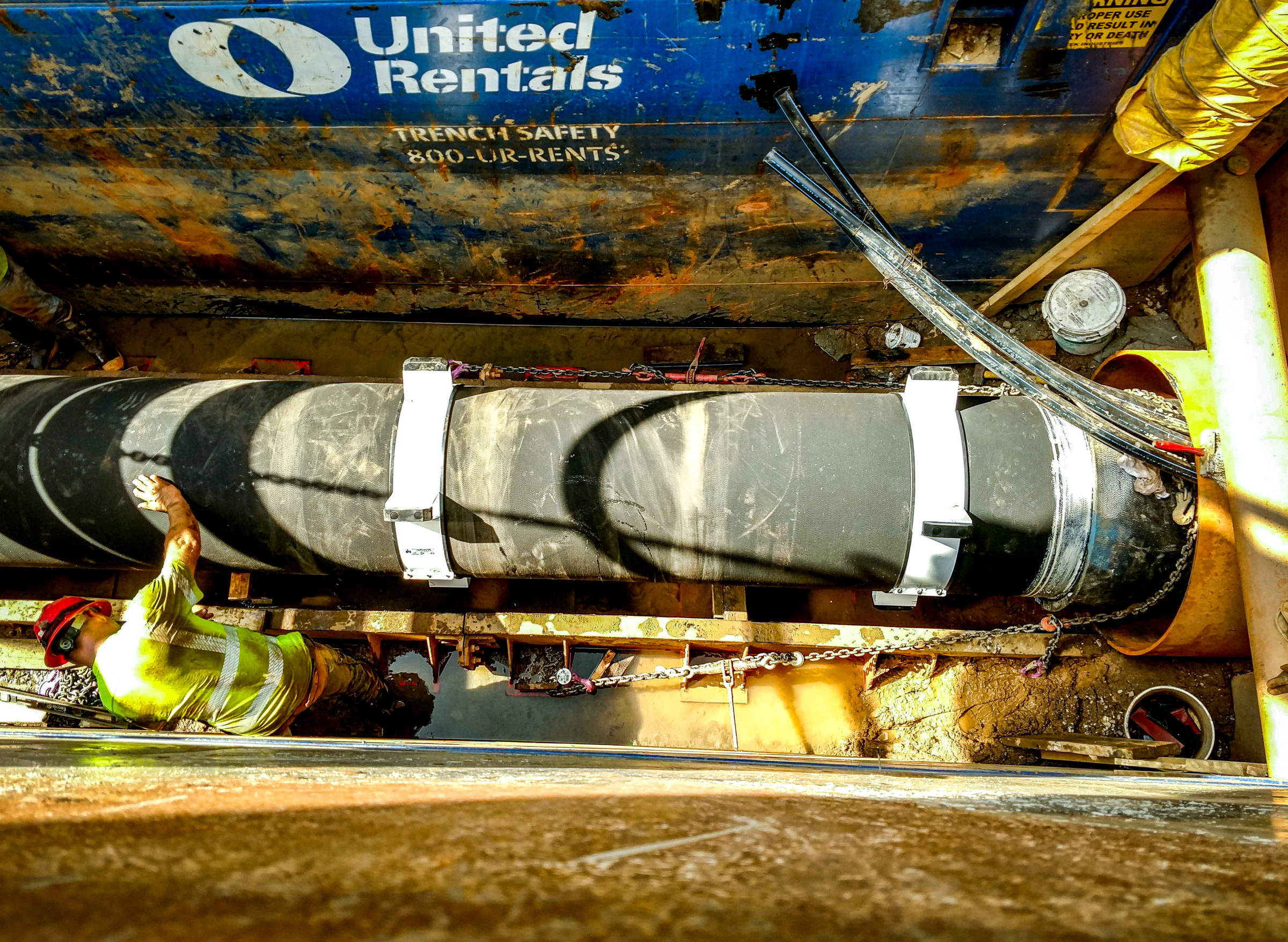 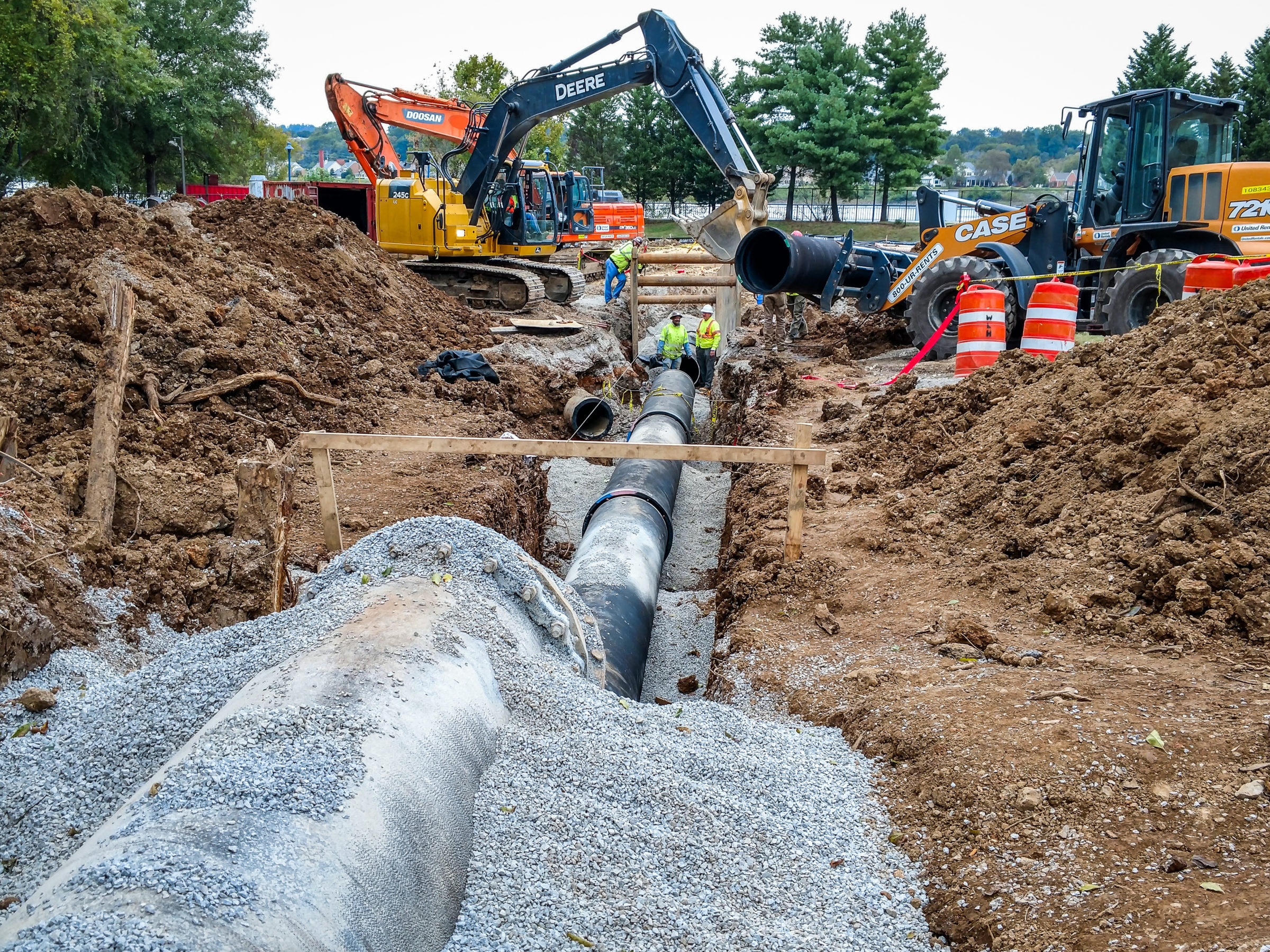 CTI’s design included the use of 30-inch restrained joint ductile iron pipe for the entire 1800 Linear Feet length of the project, beginning at a connection to existing 36-inch Prestressed Concrete Cylinder Pipe (PCCP) on the south end of the project to a 24-inch Ductile Iron Pipe on the north end of the project.

The trench for the 1400 LF of waterline in the river was pre-drilled using a barge and drilling template to accurately place explosive charges to blast the riverbed rock prior to clamshell excavation. Excavated materials were side-cast, except in the 550 Linear Feet of navigation channel, where the materials had to be loaded onto a barge, hauled away during construction, and then later returned for backfill after pipeline installation, in order to comply with COE regulations.

CTI’s design included 8-inch crushed stone bedding under the pipe, and a minimum 12-inches of stone on sides and above the pipe in the river, prior to additional backfill to provide 3-feet of cover over the pipe in the channel, and 2-feet in other locations. Concrete anchors were used for every joint of pipe for additional safety.

Following successful installation and testing of the entire pipeline, final backfilling of the underwater trench was completed. Then, a hydrographic survey of the route was performed to demonstrate that the final contours of the river bottom matched the original ones.

The construction was challenging and slowed significantly by the continual changes of the river flow, which varied as much as 20 feet in elevation and 200,000 cubic feet per second in rate of flow.

While it may often seem simple to get a waterline between two points, this project proved to be an innovative and interesting problem for the CTI, Tennessee American Water and Reynolds Construction team to solve.