The Village of Bellaire, Ohio resides on the banks of the Ohio River. For small rural communities like Bellaire, the access to clean and safe drinking water is imperative, however, these communities face obstacles keeping their utility facilities operational and in compliance with environmental regulations.

Despite being up against aging infrastructure, lack of revenue, population decline and increasingly stringent EPA requirements, the Village of Bellaire is currently implementing a unique water treatment plant improvement design to eliminate harmful Volatile Organic Compounds (VOCs) from their source water. 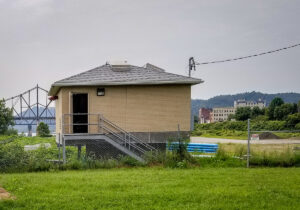 In 2013, the Village constructed a new Ranney Well to meet increased water demands. Initial testing of the water source indicated increased levels of Tetrachloroethylene (more commonly referred to as PCE and most widely used for dry cleaning or in jet fuel) due to a contaminant plume in the aquifer.

PCE is a chronic primary contaminant meaning it is known to be harmful to humans if consumed over a long period of time. The US and Ohio EPA have established a Maximum Contaminant Level (MCL) of 5 ug/l for PCE in water.

Under these circumstances, the community was faced with two options. Either drill a new well or add steps to the treatment process to eliminate the PCE.

Due to the capital costs involved in drilling a new Ranney Well and the existing Class III designation of the surface water plant, the Ohio EPA has approved the Village to treat the contaminants rather than drill a new well.

This is a rare circumstance in Ohio since PCE is usually found in groundwater, and most of the groundwater treatment plants
in Ohio do not have the technology or operators with designations to treat health-based contaminants.

PCE is a VOC with a relatively high Henry’s Law Constant, meaning it can easily be evaporated and removed from water as a gas. Currently, the best available technology to treat VOCs is with a process known as
air stripping.

Air Stripping is used to “strip” the contaminated water of PCE by forcing air through the water and separating the VOCs into vapor and clean water. The low levels of PCE vapor are released to the atmosphere and the clean water can be sent to the treatment plant for conventional water treatment processes.

Although there are not many air strippers in use in Ohio, CTI had specific experience with the technology after designing and constructing several air strippers for U.S. military bases in South Korea. With the military using jet fuel and other VOC laden fuels frequently, the bases often use air strippers to ensure the harmful VOCs in the fuel remain out of the drinking water. 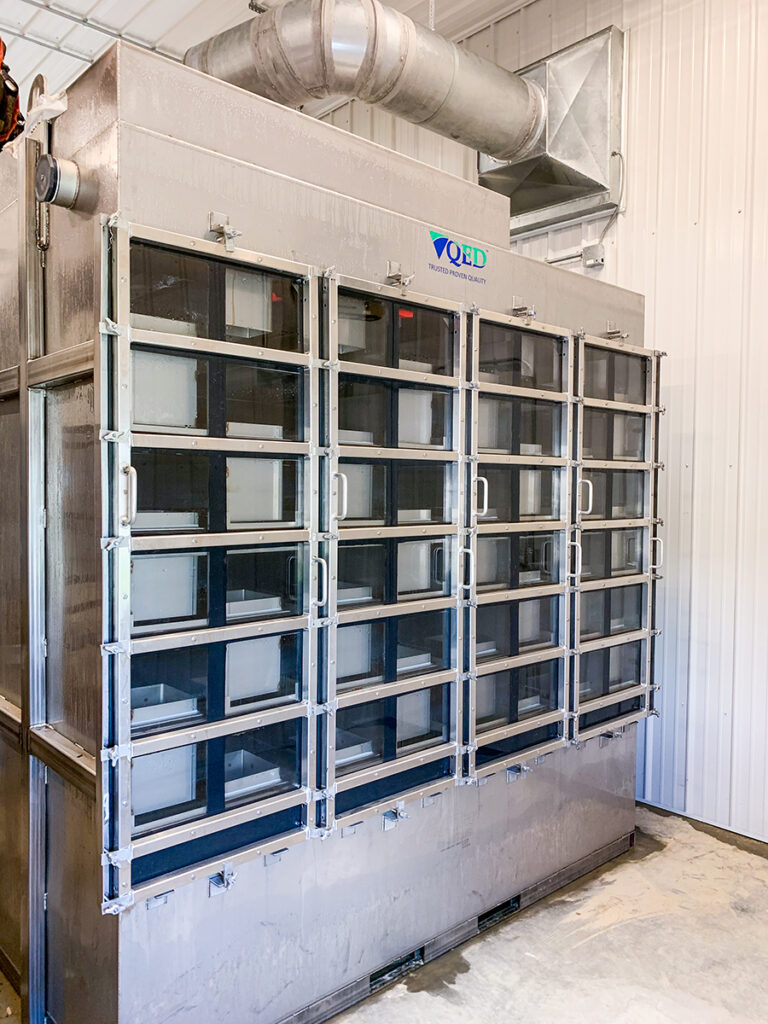 This air stripper’s compact design means it can be housed in a building for easy cleaning.

The unique design of this process in Bellaire takes it a step further and differs considerably from most conventional air strippers. While most air strippers use a tall tower filled with packed media to separate the VOCs from the water, the air stripper design in Bellaire will use trays that force air through the water. The VOCs volatilize in the air bubbles and are transported out of the water to the atmosphere.

A design like this allows the Village to house the air stripper in a designated building where the individual trays that distribute the water flow are easily removed for cleaning and maintenance. The biggest challenge the Village faced with this project was securing enough funding to comply with the mandated improvements from the EPA. As a rural community obtaining revenue and capital for projects of this magnitude are of major concern.

The Village worked closely with CTIs funding coordinator, the Rural Community Assistance Partnership, the EPA and other funding agencies to secure 50% Principal Forgiveness and a low interest loan through the EPA WSRLF Program.

With this funding the Village is also able to make other much needed improvements to the plant and the distribution system. By installing 500 new Smart Meters and 60 new distribution valves, the Village will be able to considerably improve water-loss issues from an aging distribution system as well as improve isolation issues ensuring the newly treated water makes it into the homes and business in the community.

This project is slated to begin construction in the spring of 2021 and be operational by 2022.